No one is sure of the exact origin of the Rain Stick. Ancient versions of the percussion instrument have been found in Africa, pre-Mayan Peru and with the Aztecs in Mexico. They have been discovered among the artifacts of the Diaguita people of northern Chile and Argentina, as well as with indigenous peoples of the American South West. More than just a children’s toy, the Rain Stick was used to signal the gods, and ask for life giving rain. 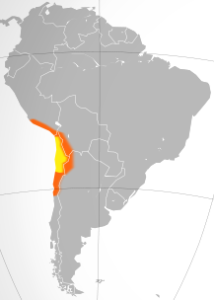 The most common rain sticks are made from dried out cactus. When the cacti die, the waxy green pulp dries and fades, revealing the bony vertical rods of cellulose which form the “skeleton” of the plant. The needles from the cactus are then pressed inward, and the hollow tube is filled with seeds, grit or small rocks before the ends are sealed. When the stick is upended, the dirt falling over the needles produces the surprising “shhhhh” noise of a gentle rain that evokes associations of coolness and freshness, hope and new beginnings.

Upend the rain stick and what happens next
Is a music that you never would have known
To listen for. In a cactus stalk

Downpour, sluice–rush, spillage and backwash
Come flowing through. You stand there like a pipe
Being played by water, you shake it again lightly

And diminuendo runs through all its scales
Like a gutter stopping trickling. And now here comes
A sprinkle of drops out of the freshened leaves,

Then subtle little wets off grass and daisies;
Then glitter–drizzle, almost breaths of air.
Upend the stick again. What happens next

Is undiminished for having happened once,
Twice, ten, a thousand times before.
Who cares if all the music that transpires

Is the fall of grit or dry seeds through a cactus?
You are like a rich man entering heaven
Through the ear of a raindrop. Listen now again.

While Heaney is describing a Rain Stick in the poem, he is really writing about people.

Each one of us, with our insecurities and shortcomings like “a dried out carcass of a cactus” has within us “a music that you never would have known [t]o listen for”.

And when we do take a moment to pay attention, we allow the best in us to come through – those things that make us feel the most alive, that allow us to be our most effective and give us a sense of deep fulfillment. When we listen for the best in others – whether they are co-workers, loved ones, or strangers – we enable them to show their highest potential.

The remarkable thing is that we do not give up anything when we let this music sing. We are “undiminished for having [played] once, [t]wice, ten, and thousand times before.” In fact the more you play a rain stick, the more refined and eloquent the music becomes as the seeds and stones smooth over one another. It is as if the rain stick were growing in confidence and skill and recognizing the music it has within itself.

Each of us has a limited amount of time on this earth – just a blink of 70 years or so. Live it beautifully. Whether it’s personal or professional, individually or within groups, let play that music that is within you.  With honest vulnerability and faith, call forth the music at the core of those around you – all the beauty, grace, creativity, swagger, honest vulnerability, passion & compassion –that is already there. There is no time for pettiness. There is no time for posturing or bickering or perceived slights. Everyone around us is just trying to figure out how to make use of their limited time too. We have no idea what they’ve suffered or feel they’ve suffered. Be gentle with them. While at home, in the office or when just out milling around amongst strangers, be who you are in the moments when you are your best.